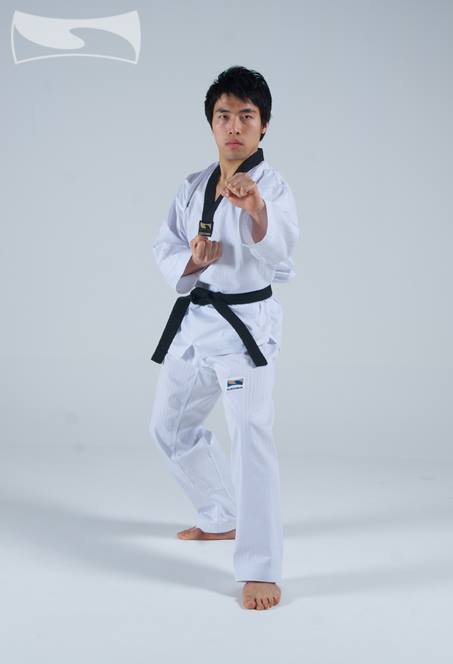 Geodeureo-makgi (거들어막기) Supporting BlockA blocking technique of one hand with the support of the other. This is a supporting motion of the other hand to generate a stronger force when blocking the opponent’s attack. It is also used as a preparatory motion to follow up the next move. 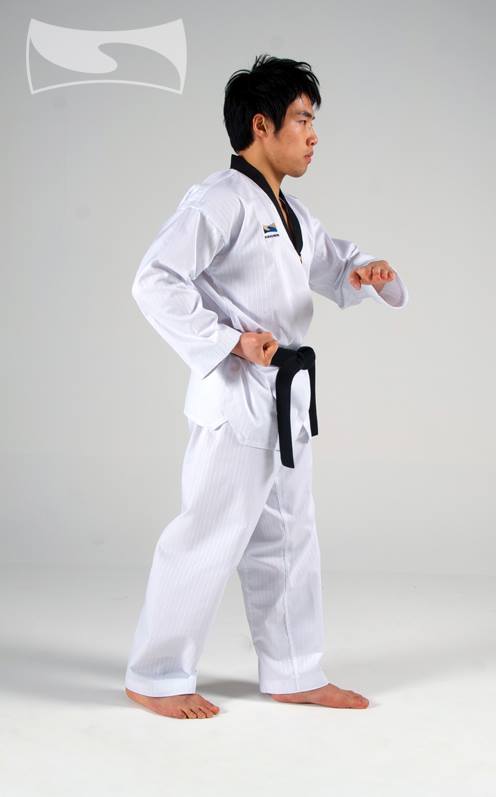 Nulleo-makgi (눌러막기) Pressing BlockA blocking technique of pressing downward against the assailant’s attack. This is a skill of blocking the assailant's attack aimed at the stomach by pressing the defender's hand down from the chest level to the lower body. The Outside Wrist, Palm Heel, Hand Blade, etc. can be employed. 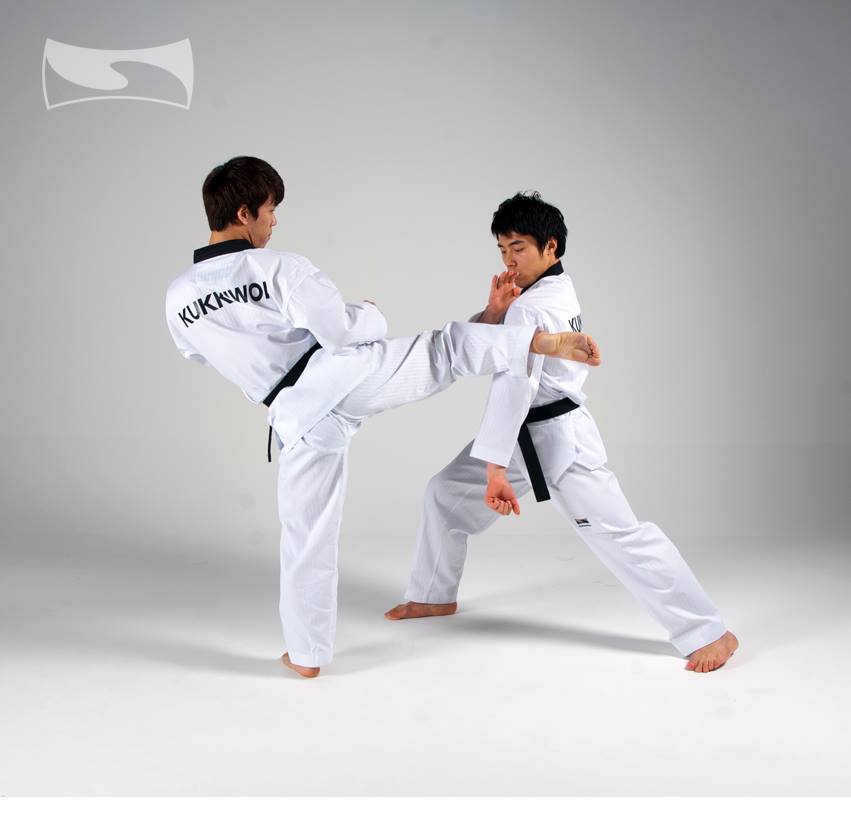 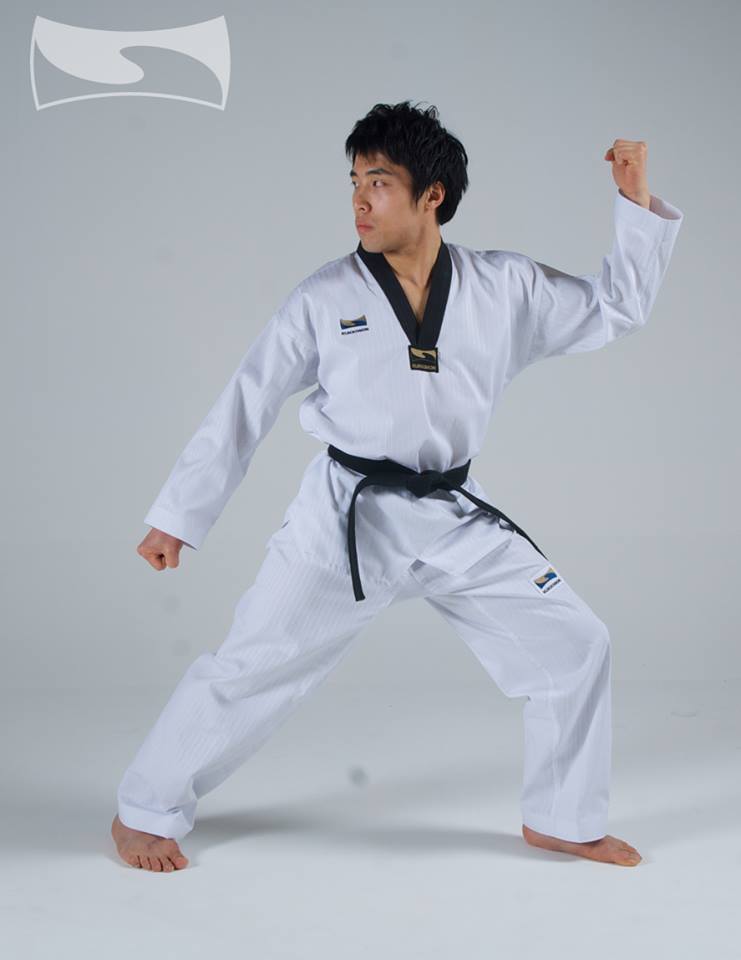 A technique of combining anpalmok-bakkat-makgi (Inside Wrist Outward Block) and bakkatpalmok-naryeo-makgi (Outside Wrist Downward Block). This is a skill of blocking the attacks aimed at the ...face and the lower part of the body. The face is blocked with the Inside Wrist of one hand while the lower part of the body with the Outside Wrist of the other hand to the side. The defender may use a combination of the Hand Blade and Ridge Hand (the inside edge of the hand) instead. 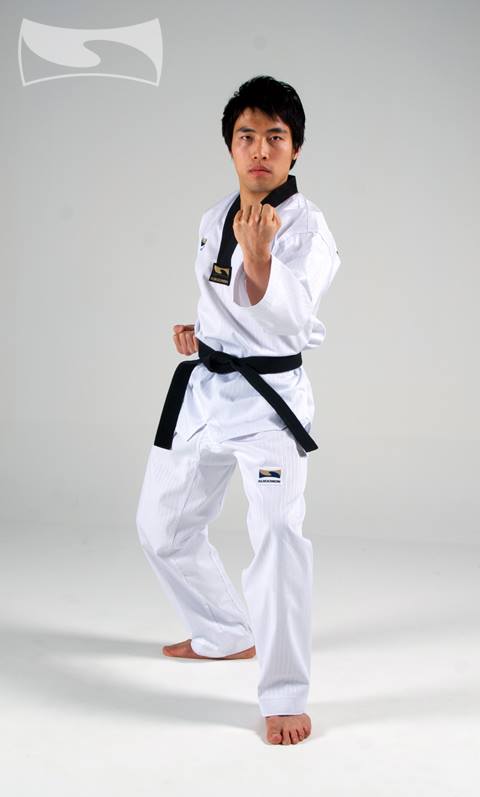 Hecheo-makgi (헤쳐막기) Double (Outward) BlockA blocking technique by crossing both wrists and pulling them out to the sides. When the two opponents attack from two opposite sides, the defender crosses both wrists each other and pulls them away from each other in opposite directions. The blocking surfaces can be either the inside wrist or the outside wrists.

Techniques of protecting the vital parts of the defender’s  body from the assailant’s attack by blocking it off with a  hand, arm, foot or leg. 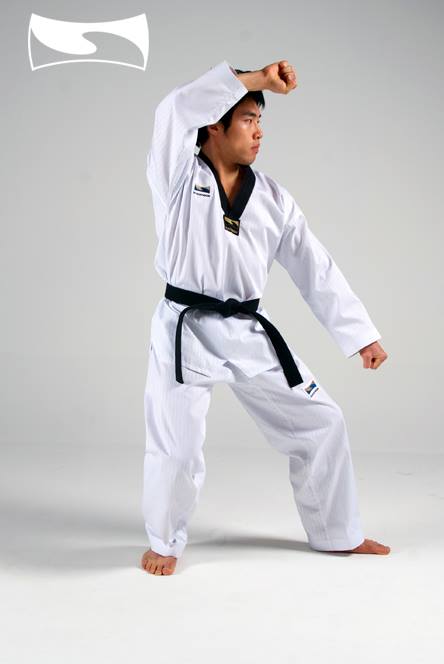 Geumgang-makgi (금강막기) Geumgang BlockA technique of combining ollyeo-makgi (Upward Block) and naeryeo-yeom-makgi (Downward Side Block) or bakkat-makgi (Outward Block). This skill is named after the statue of Geumgangyeoksa (literally, Diamond Warrior). When the opponent attacks the face and trunk or the face and lower body simultaneously, the defender may block upward with one hand to protect the face and block downward or outward with the other hand to protect the trunk or lower body. The defender may use the Hand Blades as well. 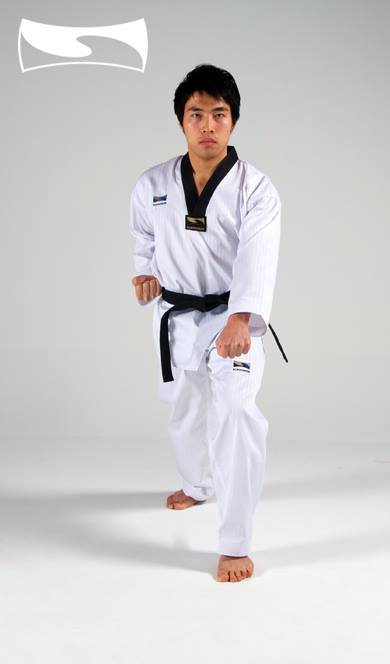 Naeryeo-makgi (내려막기) Downward BlockA technique of blocking the assailant’s attack downward from top to bottom. This is a skill of blocking downward when the opponent attacks the defender’s stomach or genitals. One may use bakkatpalmok (Outside Wrist), batangson (Palm Heel), sonnal (Hand Blade), etc. to block from the chest level to the groin area. 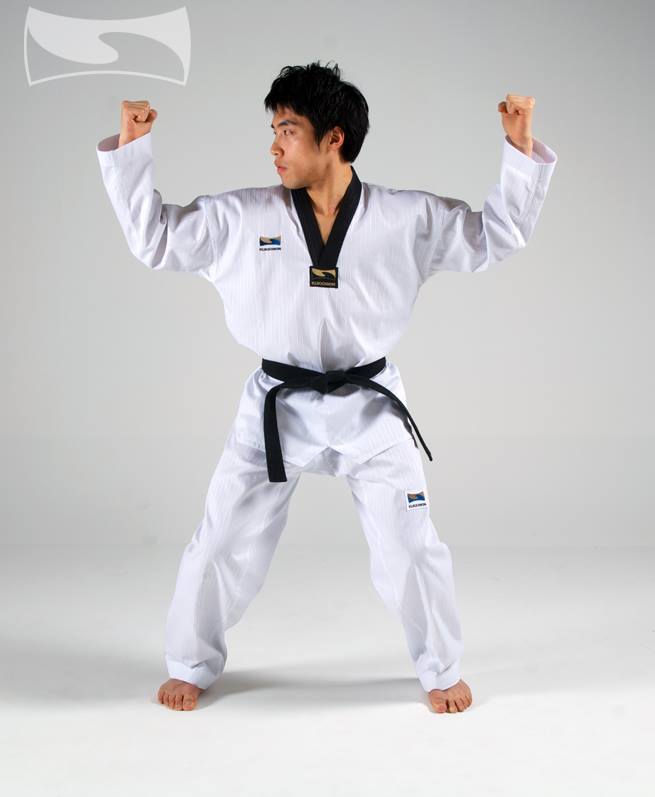 Santeul-makgi (산틀막기) Mountain BlockA technique of blocking with both the inside and outside edges of the wrists simultaneously. This is a skill of blocking two simultaneous attacks aimed at the defender’s face with the inside edge of the wrist to the clockwise direction and with the outside edge of the wrist to the counterclockwise direction. This block is a skill of blocking both sides at the same time with one’s arms in the shape of a mountain. Also, the Hand Blade and the Ridge Hand can be used. 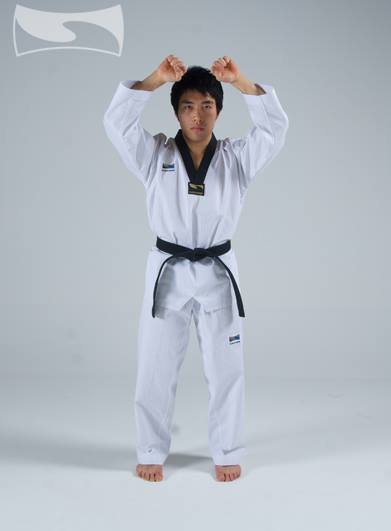 Hwangso-makgi (황소막기) Bull BlockA blocking technique of lifting the outside edges of both wrists over the head. This is a blocking skill employed when the assailant attacks over the head of the defender. The defender lifts both arms abruptly over the head at a sloping angle in the shape of bull’s horns so that the opponent’s power is weakened down along the diagonal lines of the lifted forearms. 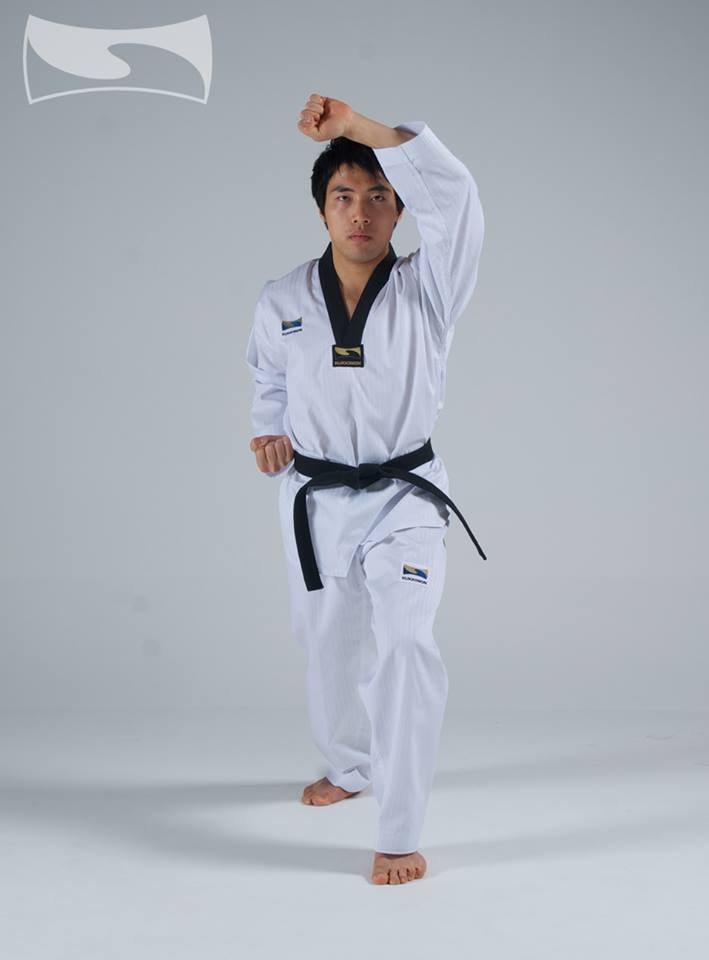 A technique of blocking the opponent’s attack upward. When attacked, the defender can use the Outside Wrist, Hand Blade or Palm Heel to block upward from the lower to the upper position. 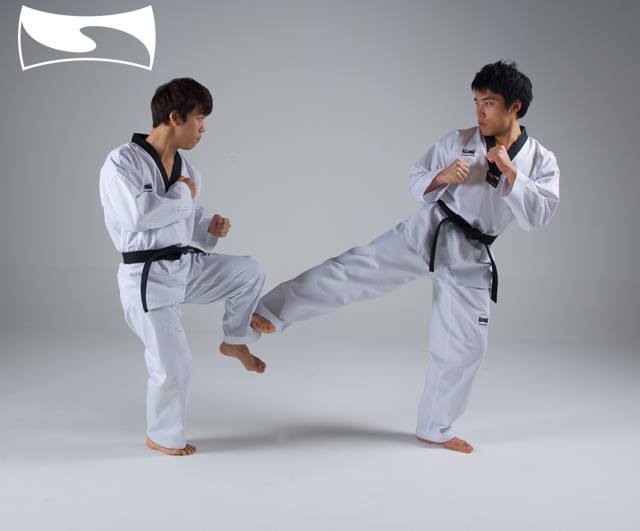 Cheo-makgi (Striking Block) is one of the conventional blocking skills frequently used in defensive taekwondo techniques. The defender confronts the assailant’s attack by matching force for force. Occasionally, bada-makgi (Absorbing Block) absorbing the impact of punching and kicking attacks, georeo-makgi (Tripping Block) obstructing the offense in advance, and geodeo-makgi (Deflecting Block) deflecting or pushing off the opponent’s attack are also employed. 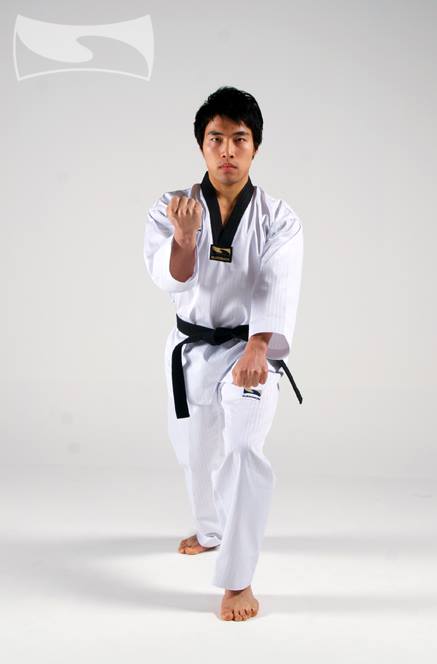 Gawi-makgi (가위막기) Scissors BlockA technique of executing anpalmok-bakkat-makgi (Inside Wrist Outward Block) and naeryeo-makgi (Downward Block) simultaneously. This skill is named after a scissoring motion of crossing both arms each other at the front of the chest. One hand makes an outward block with the inside wrist while the other makes a downward block with the outside wrist simultaneously to block the attack of the assailant aimed at the trunk and lower body of the defender. 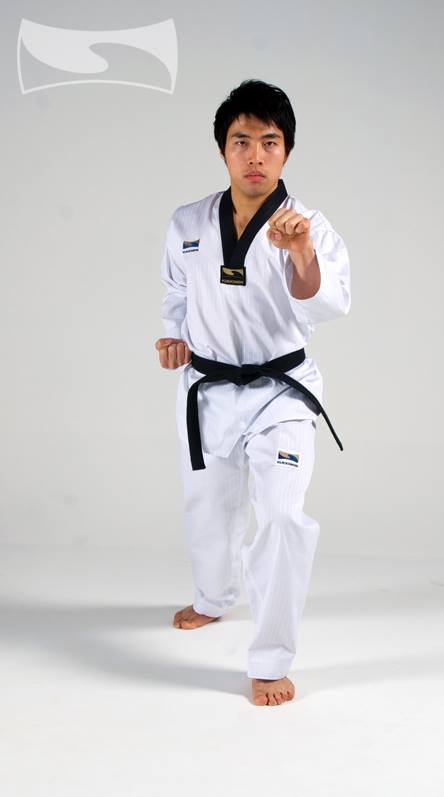 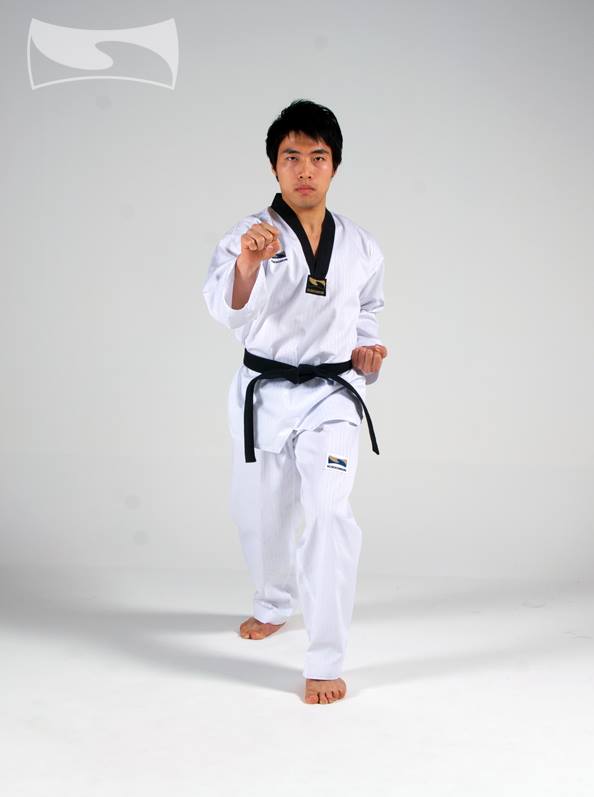 Biteureo-makgi (비틀어막기) Twisting BlockA technique of blocking with the opposite hand of the advancing foot with a twisting motion of the body. This is a blocking skill using the opposite arm and leg to block and advance simultaneously. When advancing the left foot, the defender twists his or her body from the right to the left side and uses the right hand as a blocking surface and vice versa. 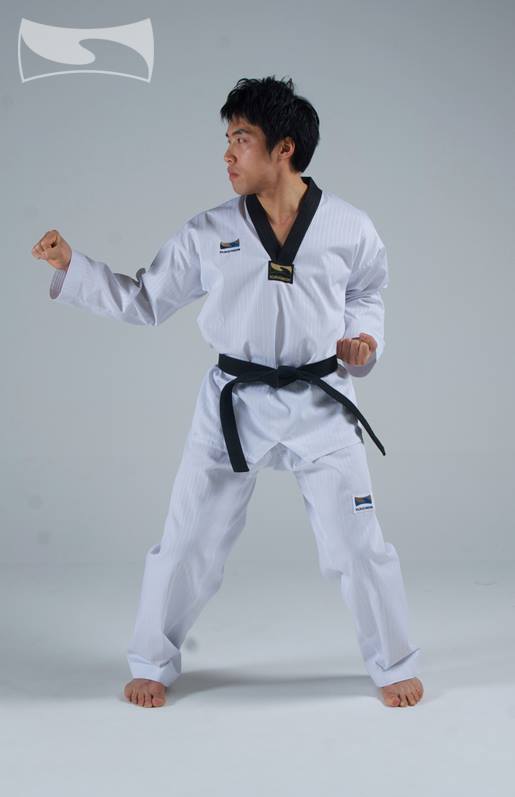 Yeom-makgi (옆막기) Side BlockA technique of blocking the opponent’s strike from the side. This is a skill of blocking the opponent’s attack coming from the side by using the Outside Wrist, the Inside Wrist, the Hand Blade, the Ridge Hand and so forth. This skill is executed by swinging a hand from the inside to the side and occasionally, one may use both hands to block one hand blocks with the support of the other. 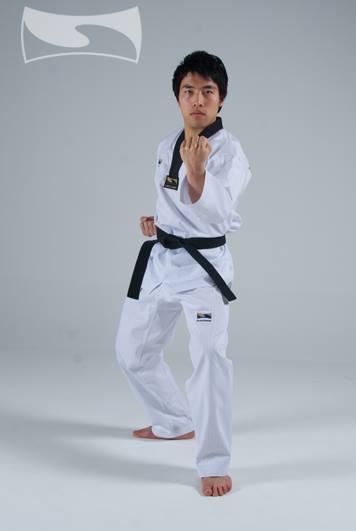