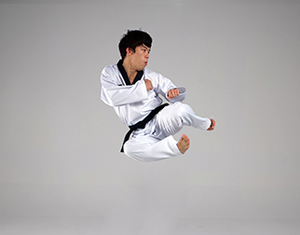 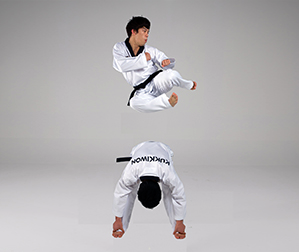 A motion of leaping over an obstacle to execute a strike to the target. This is a movement of jumping over a person or an object to strike the target with a foot or a fist.

A motion of making one or more full turn in the air vertically or horizontally. This is a movement of springing up to make one or more full turns. If one makes a horizontal motion such as dolgae-chagi (Whirl kick) or 540° Dwihuryeo-chagi (540° Back Whip Kick), it is called garo-dolgi (Horizontal Turning). A vertical kick, such as gongjungjebi-chagi (Jumping Flip Kick) or gongjungjebi-modum-chagi (Jumping Flip Drawing Kick) is called sero-dolgi (Vertical Turning).

These are movements used to attack a target that is higher   or farther than normal, or to evade the opponent’s attack. They can involve one or more vertical turns or horizontal flips. 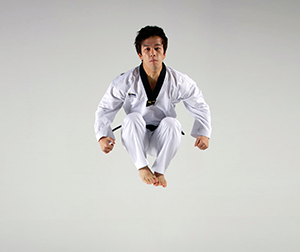