Taegeuk is the Korean name for the ‘yin-yang’ symbol which depicts perfect balance and harmony of the universe. Harmony is created by the balance of two opposite forces.

In Taekwondo all eight trigrams are represented by Taegeuk patterns. These  patterns embody the philosophy of the eight trigrams. 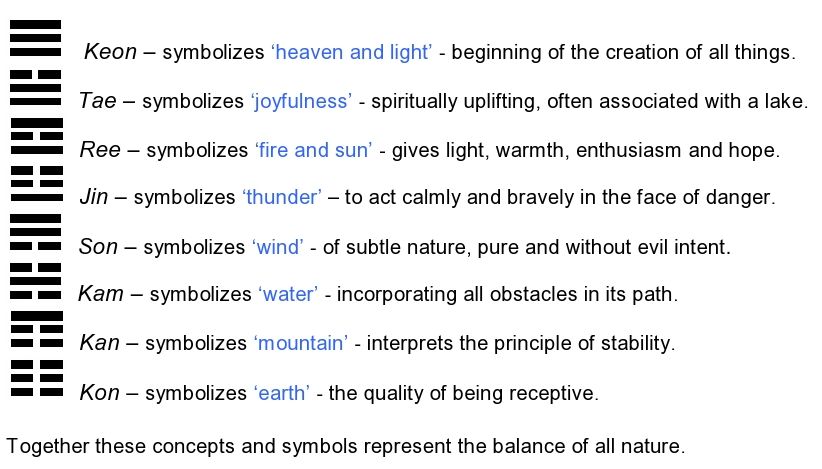 The Taegeuk symbol is most prominently displayed on the South Korean national flag, called the Taegeukgi (along with four of the eight trigram diagrams). Because of the Taegeuk's association with the national flag, it is often used as a patriotic symbol, as are the colors red and blue.

The “Keon” trigram represents the heaven, spring, east, and benevolence. The “Kon” trigram symbolizes the earth, summer, west, and justice, the “Kam” trigram the moon, winter, north, and wisdom, and the “Ree” trigram the sun, autumn, south, and courtesy.  The four trigrams supposedly move in an endless cycle from “keon” to “ree” to “kon” to “kam” and back to “keon” in their pursuit of perfection. The white background symbolizes the homogeneity, integrity and peace-loving nature of the Korean people.

The flag, called "Taegeukgi" symbolizes the thought, philosophy and mysticism of the far east.

The circle in the center, red upper half and blue lower half, represents absolute, or the essential unity of all being. The Yang (positive) and the Yin (negative) divisions within the circle represent duality. Examples of duality are heaven and hell, fire and water, life and death, good and evil, or night and day