Master Keyver opened the first ever Taekwondo school in Uxbridge in 1996 with classes held at the Uxpool. In the following years more than 40 students received their back belts under his guidance. In 2011 he retired from teaching Taekwondo and in his honour a Canadian maple tree was planted at the Uxpool, to commemorate 15 years at the heart of the Uxbridge community.

During the proceeding years Master Keyver's primary focus has been on the promotion of Taekwondo as an activity open to everyone within the community, irrespective of age, gender or ability. He has continued working to improve his own abilities and through committed training, strives for a greater knowledge and understanding of the uniquely Korean martial art. Today with over 35 years devotion to Taekwondo, Master Keyver reflects; "Passing the knowledge on to the community has been the most exceptionally rewarding aspect for me. This would not have been possible without the unparalleled support I received from the Uxbridge community over all those years".     April 10th 2014

Uxbridge - Master Keyver holds a Taekwondo seminar for advanced students at the Place of Peace and Learning Dojang. Aspects of the seminar included physical preparation for safe training and reflex and strategy for sparring.              All smiles from the attending adult students after a successful seminar.  June 16th 2013

Uxbridge - Master Keyver was delighted to present proud students with their new Taekwondo certificates. The presentation followed a successful grading for colour belts, which was held at the Place of Peace and Learning Dojang. Master Keyver also congratulated both the students and their instructor Mrs Grassinger - 2nd Dan for a                   high standard achieved.  June 14th 2013 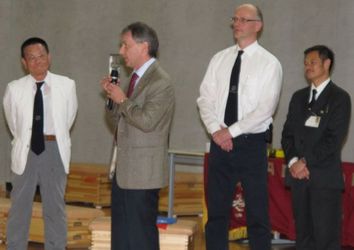 Paderborn - The German Taekwondo Team Tournament was held in Paderborn on May 15th 2011. The tournament was organised by Master Abdul Ghafar Sahak - 6th Dan and was a German Taekwondo Federation (DTB) sanctioned event. It was a full day of competition with over 150 participants from all over Germany. Guests of honour at the tournament included the Deputy Major of Paderborn, Board members of the Afghan-German Sports Club, Grandmaster Song Chan Ho - 9th Dan, Master Jay Keyver - 6th Dan, who was visiting from Canada and many other Taekwondo masters. Paderborn competitors from the Taekwondo Schule Sahak, presented themselves well and made numerous medal podium placements.  Germany May 2011