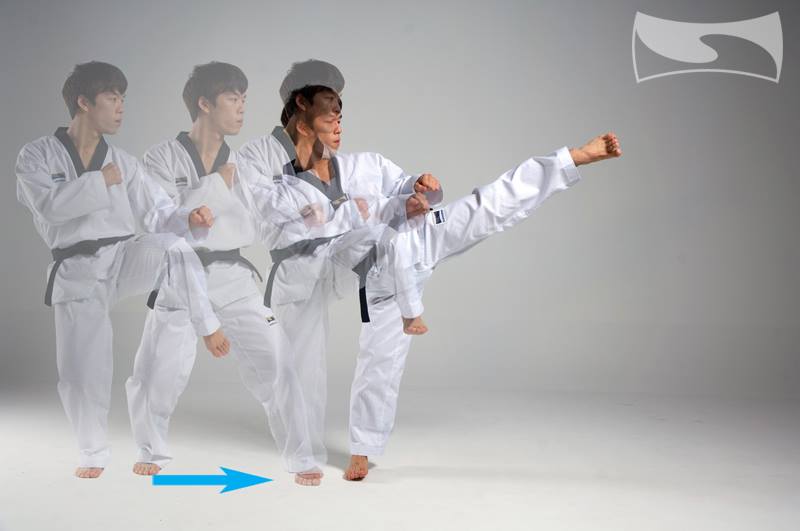 Gulleo-chagi (굴러차기) Stamping KickA technique of stamping a foot on the ground and consecutively striking a target with the same stamping foot. This is a kicking skill in which the front foot is lifted off the ground and stamped hard enough to gain a momentum. When the following rear foot is about to touch the ground, one kicks the target with the pounded foot. This skill is commonly applied to ap-chagi, dolryeo-chagi, yeop-chagi, etc. 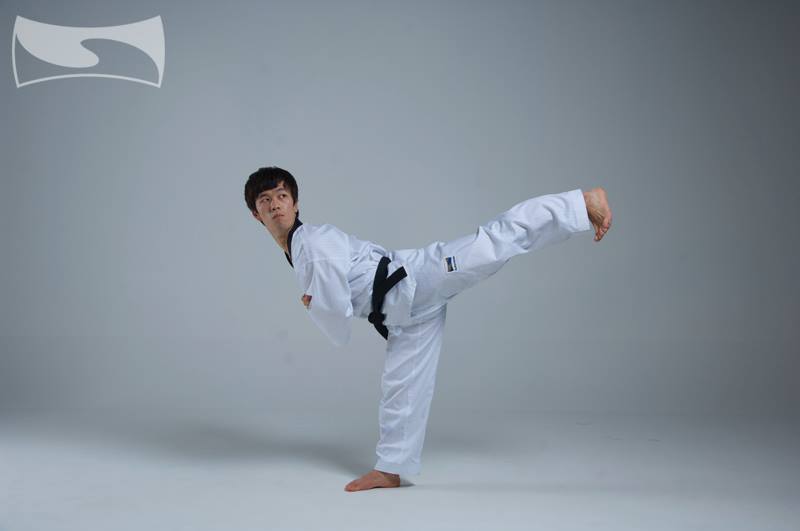 Dwi-chagi (뒤차기) Back (Thrust) KickA technique of striking the target by bending the knee and thrusting backward. This is a skill of striking the opponent with the bottom of the heel in his or her stomach or chest. This is generally employed by turning one’s body backward and executing a kick when the opponent is in front. Occasionally, one may deliver a straight kick in a fixed position to the target. 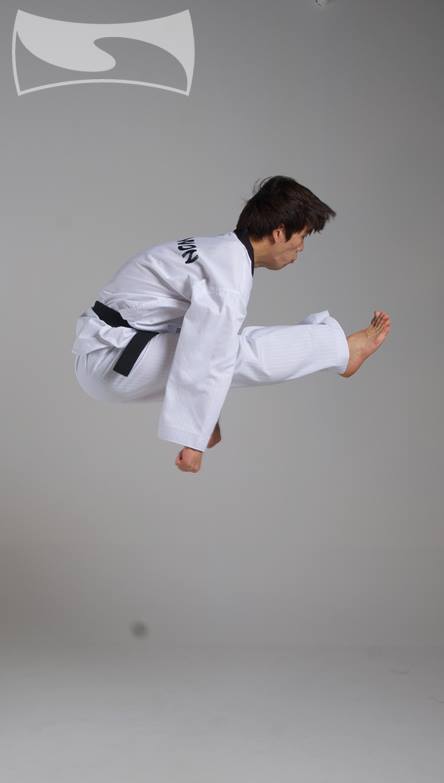 Modum-chagi (모둠차기) Drawing KickA technique of striking the same target with both feet simultaneouslyThis is a kicking skill of drawing one’s feet together in the air to strike the same target. Such kicking skills as modum-ap-chagi, modum-dollyeo-chagi and modum-yeop-chagi can be classified under this general term.

A technique of executing Turning Kicks alternately with both feet in the air. The first kick is a feint motion so that the leg is not fully extended. The second kick is to be used to strike a target with precision and power. 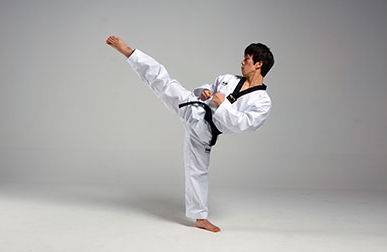 A technique of turning the foot inward to strike a target. This is a skill of pivoting the supporting leg and completely turning the hip in to strike the opponent’s face or trunk with the ball of the foot or the instep. A turning kick is generally employed to strike the opponent’s vital points such as temples and ribs with the ball of the foot. In sparring and kicking practice, the instep is utilized in order to expand the area of the striking surface or to avoid injuring the opponent while still getting points. 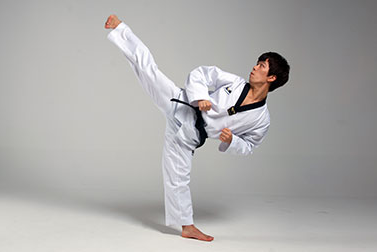 A technique of delivering a kick by turning one’s body  to the side. This is a skill of striking the opponent’s face  or chest with the outside edge of the foot or the bottom of the foot. The side kick is usually performed by turning one’s body to the side and at the same time bending the leg and extending it to kick the target. In some circumstances, one may push the opponent with the foot to maintain the distance from the opponent.

Kicking techniques used for striking targets placed in various locations with one leap.This is a skill of breaking several targets located in various directions consecutively by throwing oneself up into the air with one big leap. 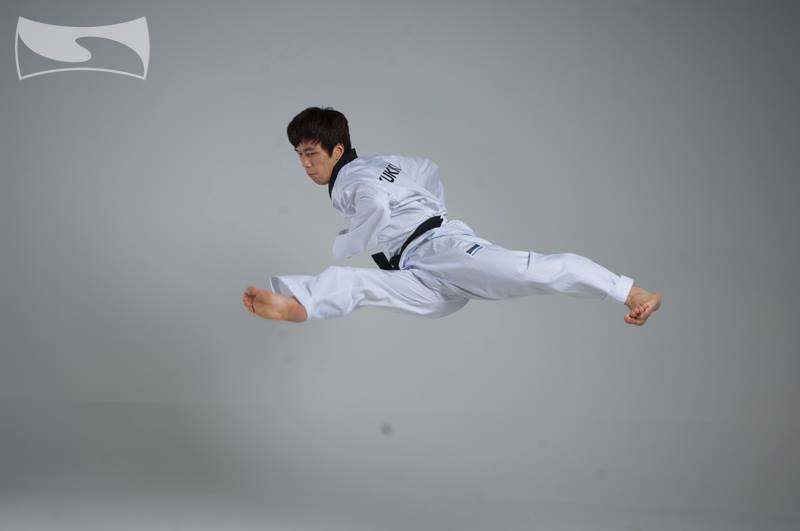 Gawi-chagi (가위차기) Scissors KickA technique of striking two targets simultaneously with both feet widely separated. This is a striking skill to jump and spread both feet in the shape of scissors and hit two different targets in the air at the same time. One foot employs biteureo-chagi while the other foot yeop-chagi (Side Kick). 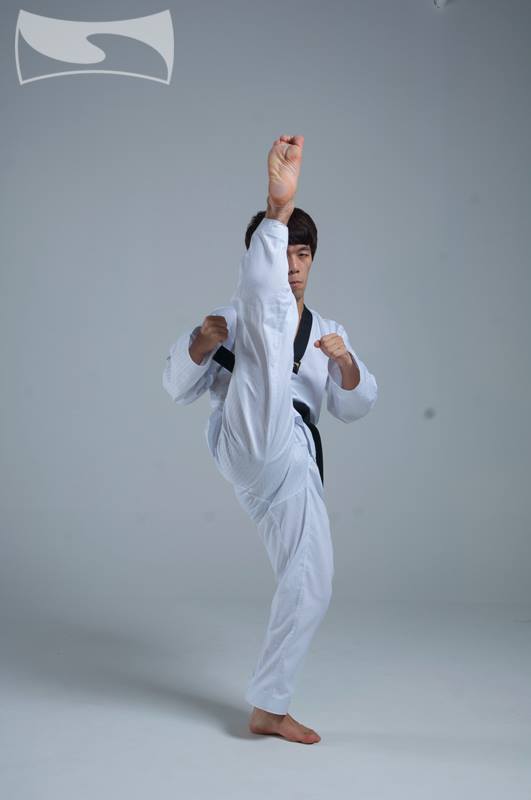 Naeryeo-chagi (내려차기) Downward KickA technique of striking a target from the upper to lower directionThis is a striking skill using the sole of the foot or the back of the heel aiming at the opponent’s face or shoulder. Naeryeo-chagi is usually performed with the knee bent, lifted, extended forward, and then striking vertically downward on the opponent. In sparring, the strike can be performed inward or outward depending on the position of the opponent. 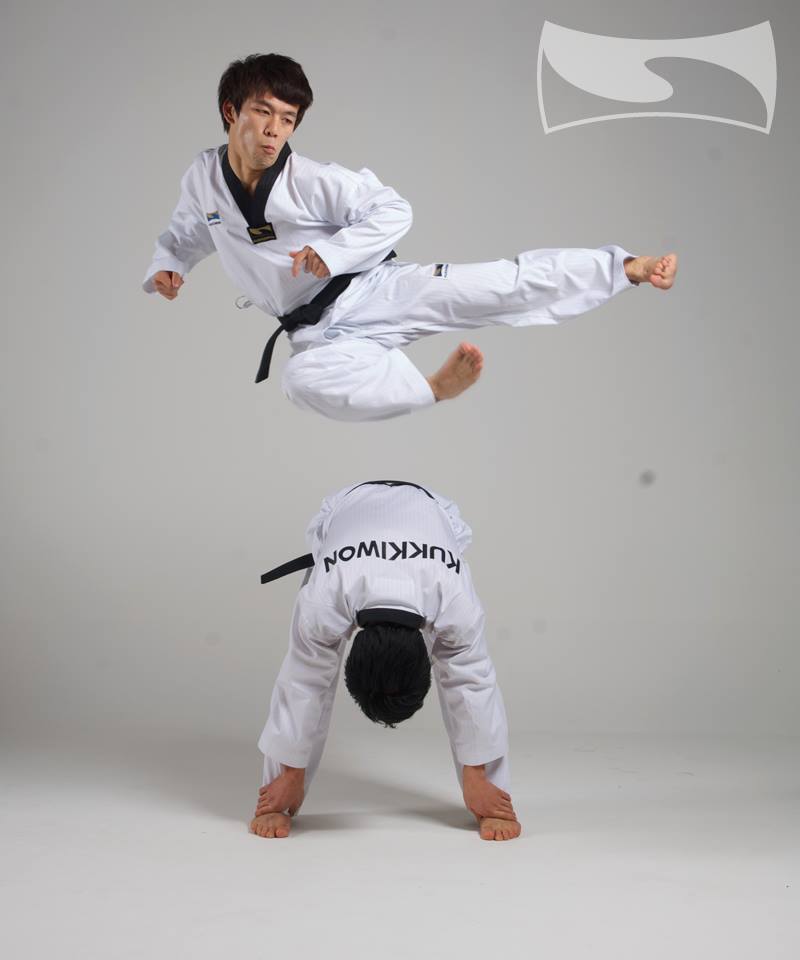 Ttwieo-chagi (뛰어차기) Jumping KickA technique of jumping and striking a target. This is a skill of jumping forward and striking a high or distant target unreachable from a stationery posture. When this skill is combined with kicking techniques such as ap-chagi, dolryeo-chagi, yeop-chagi, naeryeo-chage, dwi-chagi and dwi-huryeo-chagi, they can be classified under this general term. 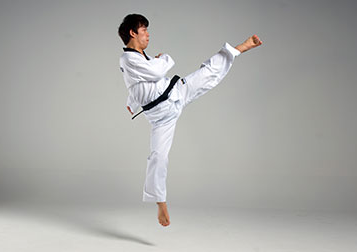 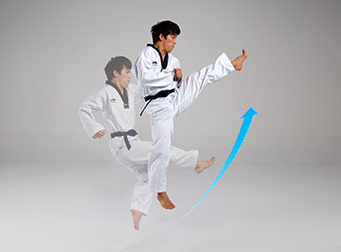 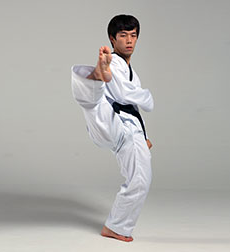 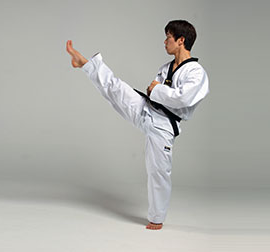 A technique to strike a target in front of the performer with the foot. This is a skill of delivering a blow to the opponent’s chin, solar plexus, stomach, etc. with one’s instep, the ball of the foot, or the bottom of the heel. Commonly, ap-chagi is executed by bending the knee and extending it to kick straight into the target. Occasionally, one can kick straight up to the opponent’s chin and testicles. One may also push the opponent with the foot to maintain the distance with him or her. 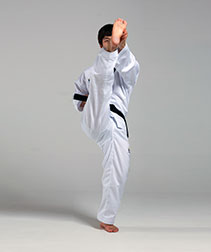 A technique of making a target with the open hand and kicking into it. When practicing poomsae (patterns), one makes an imaginary target with one’s hand and strikes it with an-chagi (Inward kick).

They are the skills to dominate the opponent in a confrontation by delivering a strike with the foot. They are offensive skills using the power generated from flexing and extending the knee or swinging the leg. 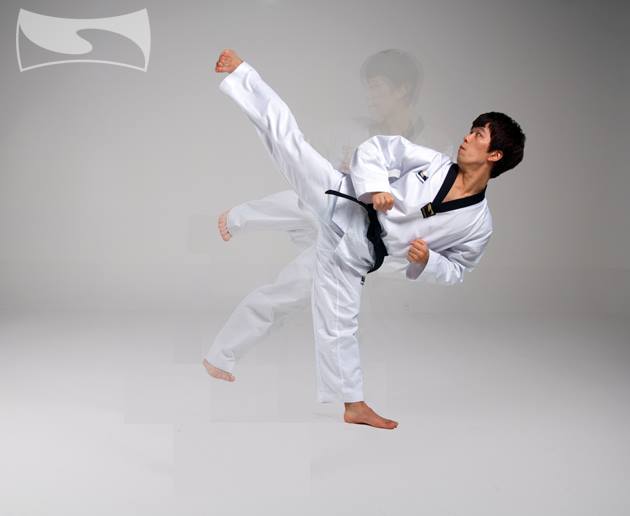 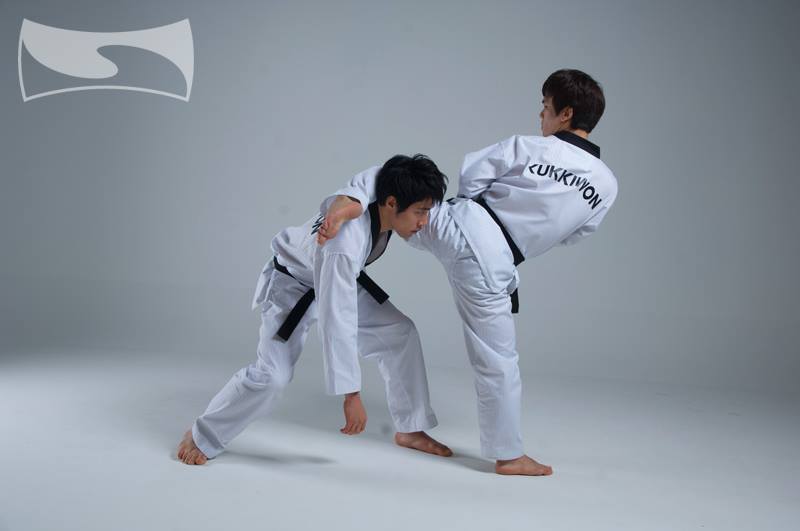 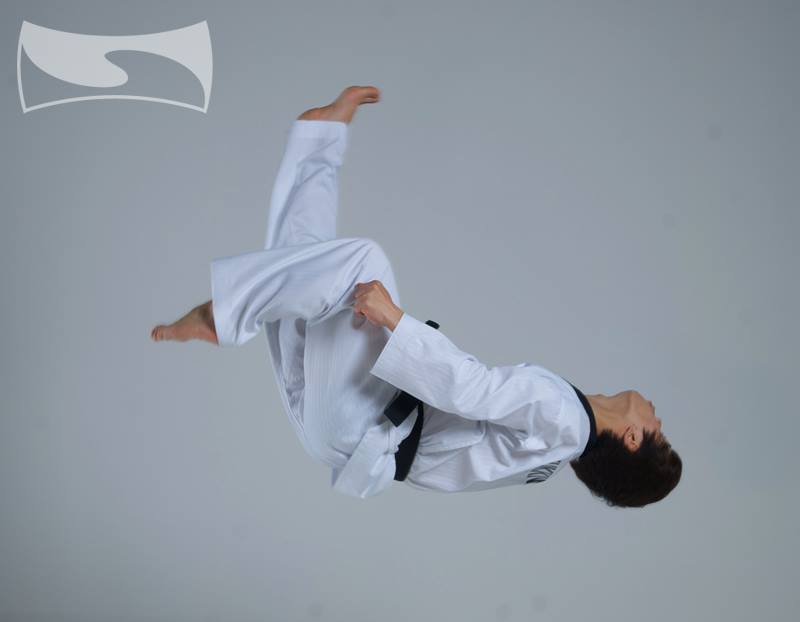 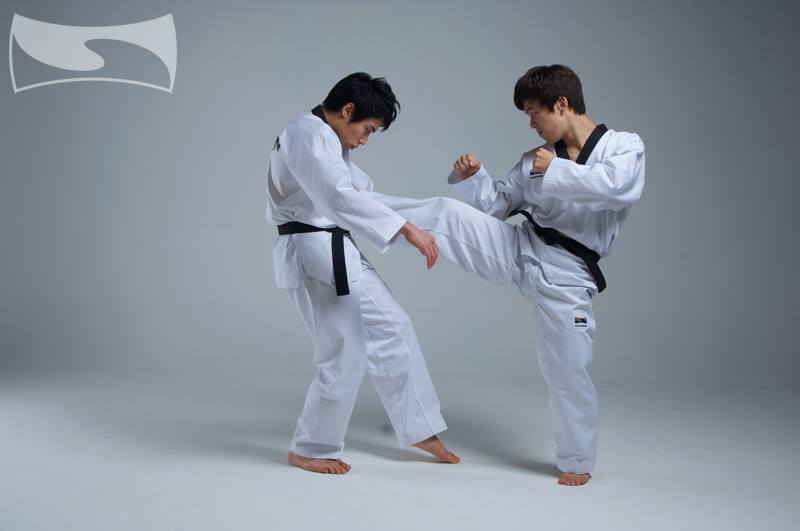 Mireo-chagi (밀어차기) Pushing KickA technique of pushing the opponent with the foot. This is a pushing technique to make the opponent fall or to maintain some distance with him or her by using the ball or sole of the foot. 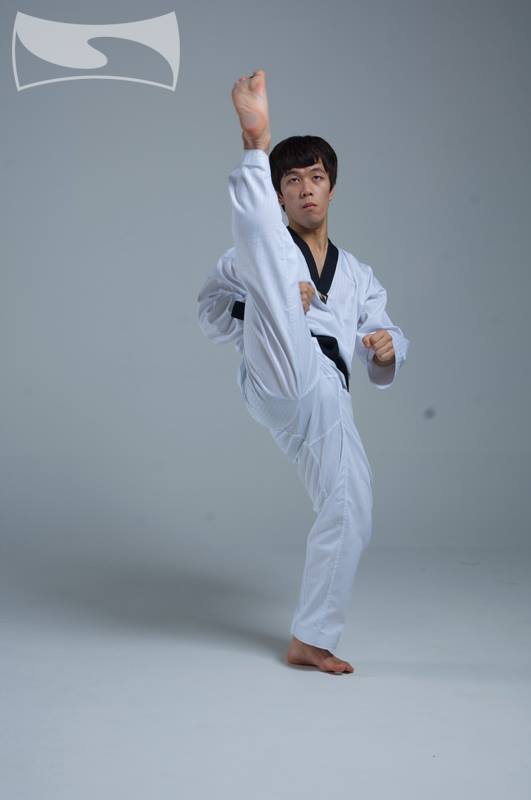 A technique of counterattacking the opponent’s attack. When the opponent launches a kicking attack in sparring, one can counter it with such skills as dolryeo-chagi (Turn Kick or Roundhouse Kick), naeryeo-chagi (Downward Kick), dwi-chagi (Back Kick), dwihuryeo-chagi (Back Whip Kick), etc. This common term is used for all such circumstances.