Although not in the forces and a Canadian, it was in Germany where I opened my first Taekwondo school. This was at the invitation of a NATO regiment stationed there and intended exclusively to teach Taekwondo to members of the forces and their families. The Paderborn Taekwondo Club held its first class on 3rd March 1990 in the ‘dojang’ which was located on the military base. I had already established a close affiliation with the regiment when on 5th May 1989 at the Garrison Boxing Finals, I held a demonstration of competition sparring Taekwondo Kyeurugi.

Time really does fly and eventually (after 35 years stationed overseas) the host regiment of the Paderborn Taekwondo Club departed Germany on 31st July 1995. I returned to Canada shortly after and on 3rd September 1996 I was able to lay the foundations for Master Keyver Taekwondo. I am now proud to say Master Keyver Taekwondo has been at the heart of the Uxbridge, Ontario community for over 20 years.

The above honours would certainly not have been possible without the unparalleled support from the students, families and community over all those years. On 3rd September 2016 Master Keyver Taekwondo celebrated its 20th Anniversary.

Travel has always been a part of Taekwondo and also necessary to attend the many international events, tournaments and seminars. On 28th April 2015 I had the opportunity to visit the Kukkiwon – World Taekwondo Headquarters, Seoul, South Korea and meet with President Jeong Man-Soon.

On 30th April 2015 I travelled to the Taekwondowon – World Taekwondo Center, Muju and also visited the Taekwondowon Museum. In addition the opportunity to travel through South Korea and experience the culture, history and visit the temples and national treasures was just unbelievable.

My primary focus in teaching has always been on the promotion of Taekwondo as a traditional martial art open to everyone, irrespective of gender or ability.  It is important students not only just practice Taekwondo, but also know the origins of this uniquely Korean martial art. Like Korea itself, Taekwondo has established traditional values with a long history, a very rich culture and philosophy. It is our responsibility to uphold those traditional values and to ensure those values are carried forward by our students. Therein, lies the greater responsibility.

In Taekwondo children should always have a special place, since the children are our future. Teaching another parent's child is a very serious responsibility. To see on their faces the ‘big smiles’ as they progress and enjoy Taekwondo, has always been the greatest reward for me.

In its modern context Taekwondo is a rewarding activity that offers something for everyone. Practitioners through quality tuition and correct guidance, can attain their personal best by discovering their unlimited potential. I continually work to improve my own abilities for the success of my students and together through committed Taekwondo training we strive for a greater knowledge. Today, with over 40 years devotion to Taekwondo, passing the knowledge on to my students has been exceptionally rewarding for me. I am thankful for what it has brought into my life. 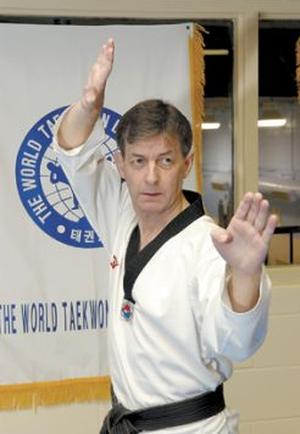